Thomas Wells holds a D.M.A. in Music Composition from The University of Texas at Austin. His principal teachers were Kent Kennan, Hunter Johnson, Clifton Williams, and Karlheinz Stockhausen. He is the author of The Technique of Electronic Music, Macmillan/Schirmer, New York, and has been professionally involved with electroacoustic music for more than 25 years. He has received grants from the National Endowment for the Arts, Pennsylvania Arts Council, Ohio Arts Council, and Texas Commission for the Art, and was the recipient of the 1990 Governorʼs Award for Outstanding Individual Artist in Ohio. He has created more than 20 works for electroacoustic media, in addition to concertos, film scores, band and orchestra works, and chamber music. His works have been performed nationally and internationally, with recent performances including Sechs Trakl Gesaenge, a 45ʼ piece for chorus, orchestra, and tenor soloist commissioned by the Johannes Gutenberg University School of Music; and Echoes from the Southern, performed by the ProMusica Chamber Orchestra. He founded the New Music Ensemble at The University of Texas at Austin, School of Music and served as its director for many years. With that group, he presented the American premiere of Karlheinz Stockhausenʼs Kurzwellen, Adieu, Aus den Sieben Tagen, and Cardewʼs Great Learning. He is active as a performer, and appears regularly with James Hill, Professor of Saxophone at The Ohio State University as Duo Contemporain. He is currently Professor of Composition and Director of the Sound Synthesis Studios at The Ohio State University, and serves as President of the 1500-member Society of Composers, Incorporated — the largest service organization for composers in America. 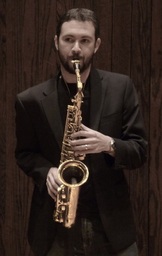 Dr. Michael Rene Torres is currently on faculty at Muskingum University where he is Lecturer of Saxophone and Composition and has served as the Assistant Event Coordinator for The Ohio State University Contemporary Music Festival since 2010. He is also an Assistant Dean of Student Life at the Brevard Music Center and before this was the Director of Bands at Ormond Beach Middle School in Central Florida. While in this position he was the 2006-2007 recipient of the schoolʼs First-Year Teacher of the Year Award and was nominated for the First Year Teacher Award of the Volusia County Public Schools FUTURES Program. Michael is an award winning saxophonist having been selected as the First Place winner in the 2010 OSU Doctoral Concerto Competition and as the First Place Winner in the Graduate Performance Competition of the 2009 Penn State University Single Reed Summit. Michael has performed with the Newark-Granville Symphony Orchestra, the Mansfield Symphony Orchestra, and the Southern Winds Wind Symphony, and has performed as a soloist with the Muskingum Valley Symphonic Winds, the OSU Symphony Orchestra, the OSU Wind Symphony, and the OSU Percussion Ensemble. Furthermore, Michael is an active chamber musician as a member of the flute and saxophone ensemble, the Tower Duo with his wife and flutist, Erin Helgeson Torres. He is also the alto saxophonist of the Black Swamp Saxophone Quartet. As a composer, Michael was awarded First Prize and the Audience Favorite Award at the 2010 Johnstone Woodwind Master Series Composition Competition, received an OSU Arts & Humanities Graduate Research Grant commission for a new composition for Alto Saxophone and Electronic Media, and his piece Short Episode for Solo Flute was recently selected in a “Call for Scores” and performed at the University of South Dakota in 2012. Michael completed a Doctorate in Saxophone Performance at The Ohio State University in 2012 where he studied saxophone with James Hill and composition with Thomas Wells. In 2006 he earned a Masters Degree in Saxophone Performance at Northwestern University where he studied under the tutelage of Frederick L. Hemke. Prior to this he received a Bachelor's Degree in Music Education from Stetson University while studying saxophone with James Bishop. Michael also studied saxophone with Joseph Lulloff as a student at the Brevard Music Center in 2008 and is currently pursuing a second Masters Degree in Composition at The Ohio State University. For more information about Dr. Torres, visit his website: www.michaelrenetorres.weebly.com

The Society of Composers, Inc. is a professional society dedicated to the promotion, performance, understanding and dissemination of new and contemporary music. Members include composers both in and outside academia interested in addressing these concerns on a national and regional level. SCI was founded in 1966 as the American Society of University Composers. The mission of the original organization was to further the cause of contemporary American music by providing opportunities for performance, recording, and publication of members’ works. For more information, visit the SCI website: http://www.societyofcomposers.org/index.php

As one of the largest universities in the world, The Ohio State University offers a wealth of resources on its beautiful campus in Columbus, Ohio. In the midst of this educational community, the School of Music is part of the College of Arts and Sciences, the academic heart of Ohio State. The School is a unit large enough to take advantage of the endless possibilities provided by a world-class university, yet small enough to attend to the individual needs of its students. Founded in the late 1800's, the School of Music offers today's students, faculty, and guest artists an innovative place for making exceptional music, stimulating artistic growth, exploring educational methodology, and conducting groundbreaking research. For more information, visit the School of Music website: http://music.osu.edu/