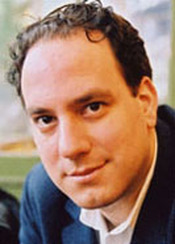 Joshua Fineberg is Associate Professor of Music, Composition and Theory at Boston University where he is the Director of their Center for New Music and their Electronic Music Studio. BM Peabody Conservatory; Cursus de Composition et Informatique Musicale, IRCAM; DMA, Columbia University. He has won various prizes, fellowships, and scholarships, including ASCAP; Ars Electronica; Boris and Edna Rapoport Prize; Arnold Salop Prize; yearly ASCAP Awards; and the Randolph S. Rothschild Award. Commissions from major international institutions and performers, including Fromm Foundation, Robert Levin, French Ministry of Culture, l’IRCAM, Marianne Gythfeldt, Radio France, American Pianists Association, Ensemble Court-Circuit, Ensemble l”Itinéraire, CCMIX, Dominique My, and Ensemble FA. His “imagined opera” Lolita for actor, dancers, video, ensemble and electronics was premiered in Europe in 2008 and in the United States in 2009 in a version staged by Jim Clayburgh and Johanne Saunier’s Joji company. Besides his compositional and pedagogical activities, Joshua Fineberg actively collaborates with computer scientists and music psychologists, and he has been involved in performing ensembles and as artistic director for recordings. Joshua Fineberg was also the issue editor for two issues of The Contemporary Music Review on “Spectral Music” and for a double issue featuring the collected writings of Tristan Murail in English. He also served as the US Editor for The Contemporary Music Review from 2003-2009. His book Classical Music, Why Bother? was released in June 2006. Former faculty member at Columbia University and Harvard University. Music published by Editions Max Eschig and Gérard Billaudot Éditeur. Recordings of his work released by Accord/Universal, Harmonia Mundi, and Mode Records. 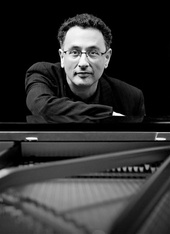 Fali Pavri enjoys a busy and varied career as soloist, chamber musician, teacher and adjudicator. Born in Mumbai,India, he studied the piano at the Moscow Conservatoire with Professor Victor Merzhanov and at the Royal Academy of Music, London with Christopher Elton. While still a student, he was invited by the great Russian cellist, Mstislav Rostropovitch to be his pianist on an extensive concert tour of India. This was followed by his London debut at the Purcell Room and concerts in prestigious venues around the world. He has performed and collaborated with many eminent musicians including the Vellinger and Vertavo quartets, the Leopold Trio, Paragon Ensemble,  Scottish Ensemble, clarinetist Andrew Marriner, cellist Franz Helmerson, singers Roderick Williams and Mark Padmore and composer Mauricio Kagel. Fali was, for many years, a member of the Pirasti Piano Trio and he has a successful duo with his wife, the cellist Naomi Boole-Masterson. He has recorded two critically acclaimed discs with the cellist Timothy Gill on the Guild label, including world premieres of two works by the Indian composer, John Mayer (“Prabhanda” and “Calcutta Nagar”). In 2009 he recorded another world premiere, the song cycle "Black Sea" by the British composer Anthony Bolton, with the tenor Richard Edgar-Wilson. His latest CD which features the music of the Swiss composer Volkmar Andreae was awarded the coveted "IRR Outstanding" accolade by the International Record Review. Radio broadcasts include regular appearances on BBC Radio 3, where he has played some unusual and challenging repertoire including the Sinding Piano Quintet with the Vertavo Quartet and Alexander Goehr’s “Das Gesetz der Quadrille” with the baritone, Roderick Williams. He has recorded for All-India Radio with Mstislav Rostropovich  and  for CBC (the North-American premiere of “La Trahison Orale” by Mauricio Kagel). A committed and sought-after teacher with many prize-winning students, Fali Pavri is a Professor of the Royal Conservatoire of Scotland and is also much in demand as an adjudicator and examiner. He has given masterclasses in many countries around the world including recently in Estonia, Finland, Cyprus, India and South Africa, where he was also a jury member at the Unisa International Piano Competition. 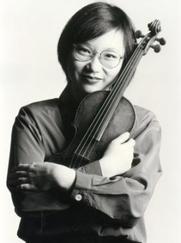 Kia-Hui Tan has performed as concerto soloist, recitalist and chamber musician in 25 US states and 20 countries on five continents, including at London's Barbican Hall and New York's CarnegieWeill Recital Hall. Described in The Strad as a “violinist whose virtuosity was astonishing," she has won numerous awards including the Bronze Medal at the first NTDTV Chinese International Violin Competition at Town Hall in 2008. Included in her repertoire of over 400 solo or chamber works are premiere performances of works by more than 70 living composers. She has been a member of various new music ensembles and is frequently invited to perform at contemporary music festivals and conferences, often presenting themed lecture-recitals on the vastly unexplored repertory for unaccompanied solo violin. Also an experienced orchestral violinist, she had served as concertmaster under Sir Colin Davis and Mstislav Rostropovich among many other notable conductors. Currently Associate Professor of Violin at The Ohio State University, Tan had been on faculty at Cornell University, University of Toledo, The Cleveland Institute of Music and Cleveland Music School Settlement before joining the Ohio State faculty in 2005. She is in demand as a master class presenter, adjudicator, strings coach and guest conductor in high schools, colleges and youth orchestras; her outreach activities have extended as far as China and Colombia. She is the recipient of the 2008-9 School of Music Distinguished Teaching Award. Tan studied piano, violin, music theory and composition in her native country Singapore before receiving scholarships to the Guildhall School of Music and Drama and The Cleveland Institute of Music where she was conferred the doctor of musical arts degree in 2001. Her principal teachers included David Takeno, David Updegraff and Stephen Shipps. She continues to explore how Alexander Technique, Tai Chi and Nervous System Energy Work influence and enhance her violin playing and teaching. 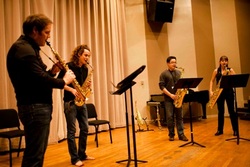 Anubis Quartet is dedicated to reshaping the saxophone quartet genre and reconceptualizing the way listeners experience the instrument through contemporary music. The quartet acts as a performer, presenter, and educator; through hands-on collaborations with composers, inventive programming and curating, and a business structure as a publicly supported nonprofit arts organization, Anubis Quartet forges a model to meet the demands of 21stcentury artists and composers while engaging new audiences with the saxophone through groundbreaking new works. Anubis Quartet places significant emphasis on curating and is known for innovative concert formats. Each member of the quartet regularly performs on all members of the saxophone family – from sopranino to bass, sometimes in the span of a single concert – which results in engaging and varied performances that exponentially increase the possibilities of expression through sound. Commissions frequently involve strange and obscure instrument combinations and require the quartet to expand and contract as necessary, often including non-saxophone collaborators. Anubis Quartet was formed in 2007 and establishes a symbolic connection between Anubis, the Egyptian God of the Underworld, and the volatile yet sensual world of sound, color, and transformation which is vital to contemporary music. The group’s name also pays homage to revolutionary spectralist Gérard Grisey, whose work has inspired and influenced its members. For more information visit their website:
http://www.anubisquartet.com/Anubis/Anubis_Quartet.html

The Black Swamp Saxophone Quartet has been presenting unique and exciting performances since its inception in 1986. The quartet plays a variety of musical styles and selects literature from a vast repertoire of classical, jazz and contemporary music. Many of the works performed have been written for the BSSQ by composers such as: Pulitzer and Grammy winning composer, Jennifer Higdon and University of Michigan composer, Evan Chambers. The BSSQ has performed at the Bowling Green New Music and Art Festival, Columbus Arts Festival, the Cincinnati Center for Contemporary Art, the New Music Chicago Spring Festival, the Phillip’s Collection in Washington D.C., the Lancaster Festival, the Newport Music Hall in Columbus, Ohio, and the Columbus Museum of Art. The quartet has also been artist-in-residence at the Arosa Musikwochen in Switzerland as well as winning first prize in the Fischoff National Chamber Music Competition and finalist in the Martigny (Italy) International Music Competition. The quartet is currently in the process of recording all saxophone quartet literature in the OMEA Solo and Ensemble list. This list is used by every band director in the state of Ohio as a resource to select established literature for their students to perform. BSSQ is also a member of the Greater Columbus Arts Council’s Artists-in-Schools program. For more information, visit the BSSQ website: http://www.blackswampsaxophonequartet.com/index.shtml 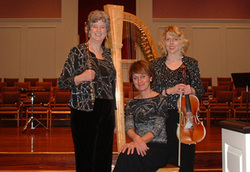 Founded in 2004 by three members (Katherine Borst Jones, Flute; Jeanne Norton, Harp; Mary E.M. Harris, Viola) of ProMusica Chamber Orchestra in Columbus, Ohio, Cosmos explores music for the magical blend of flute, harp and viola. Engaging and accessible, Cosmos combines the best of European tradition with adventurous contemporary music, including commissioned works by Libby Larsen, Stephen Paulus and other leading composers. With a repertoire that ranges from Telemann to Takemitsu, Cosmos delights listeners with its appealing programs and audience-friendly approach. Each concert offers listeners a unique experience, exploring the sounds and colors of music from across the centuries and around the world. For more information, visit the Cosmos Trio website: http://cosmostrio.org/ 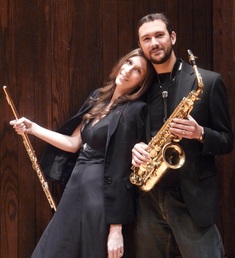 The Tower Duo is a flute and saxophone ensemble that is dedicated to sharing the importance of the arts through chamber music with communities throughout the United States. The ensemble also has a special interest in performing and premiering contemporary works to expand the repertoire of this unique instrumentation. The Tower Duo, whose members are flutist, Dr. Erin Helgeson Torres and saxophonist, Dr. Michael Rene Torres, gave its inaugural performance during the 2010 season of the Brevard Music Center in North Carolina where both Michael and Erin serve as Assistant Deans of Student Life. Erin, Associate Flutist with the Columbus, Central Ohio, Springfield, Westerville, and Lima Symphonies and Michael, Lecturer of Saxophone and Composition at Muskingum University, are both award-winning performers and educators. Recent engagements have included performances at the 35th International U.S. Navy Band Saxophone Symposium at George Mason University, the Columbus Museum of Art, the 2011 Wright State University Saxophone Festival, the Southern Theater in Columbus, Ohio, the Brevard Music Center Summer Institute and Festival, The Ohio State University, and Muskingum University. For more information about the Tower Duo, visit their website: www.towerduo.weebly.com

Under the direction of Dr. Lynda Hasseler, Capital University’s Philomel, which means Nightingale, is a select ensemble of singers who master the challenge of advanced literature from a range of musical styles spanning Renaissance to contemporary/pop styles. With extensive training rooted in the rich Lutheran heritage of fine a cappella singing and a longstanding global touring tradition, Philomel is more than a collection of beautiful voices. It is a choral envoy of joy, hope and positive social change that leverages the transformative power of music to connect people from diverse cultures around the world. Unique to this group is a repertoire whose styles span a wide range of secular and sacred choral literature, spirituals, gospel, carols, music celebrating a global perspective, and jazz and pop music.